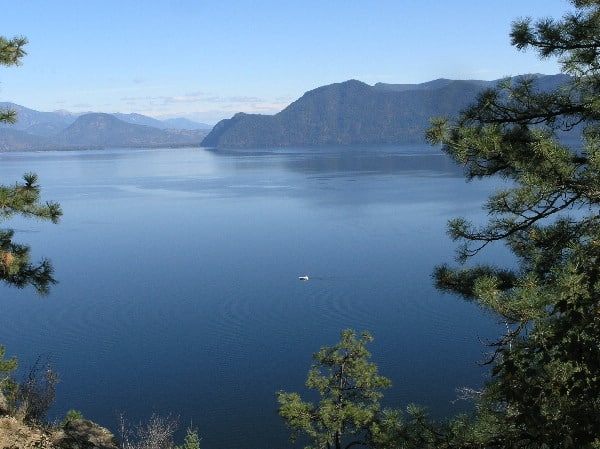 (Photo of the lake from visitnorthidaho.com)

I had a realization. As we’ve been highlighting Sandpoint Idaho and the surrounding activities, we’ve mentioned Lake Pend Oreille—in almost every single post of the area—yet it hasn’t gotten its own post. Seeing as how this is the largest lake in Idaho, it definitely deserves its own spotlight.

So let’s fix that oversight and talk about the amazing Lake Pend Oreille!

As we’ve already said, this is Idaho’s largest lake. It’s 43 miles long with 111 miles of shoreline and is also the deepest at 1,158 feet deep. In fact, there are only four deeper in the United States.

There are Parks, beaches, and trails!

Lake Pend Oreille has plenty of parks, boat launches, picnic sites and other attractions. These include Farragut State Park, which we talked about in a previous post, Whiskey Rock, which is a Forest Service fee-free campground, Garfield Bay, a county park and campground, and Springy Point, which is operated by the U.S. Army Corps of Engineers. This list barely touches the number of parks to check out! So be sure to hop over to the web site below for more.

Activities on the lake include our favorite thing, Boating!

Lake Pend Oreille boasts numerous boat launches around the shoreline. You can jet ski, hang out on a pontoon, sail on a sailboat or kayak. Plus, there are a number of marinas with fuel docks, food and services.

Other Activities include Wildlife and Fishing:

There’s an active population of ospreys and bald eagles around the water. Plus, you might catch a glimpse of a moose, deer or bear. Or hang out and watch migrating waterfowl including swans, geese or ducks.

As for fishing, Lake Pend Oreille is known for its kamloops (a type of huge rainbow trout), mackinaw and kokanee salmon. (Kamloops and mackinaw exceeding 20 pounds are not unusual). There are also bass, walleye, and various trout species for the angler’s pleasure.